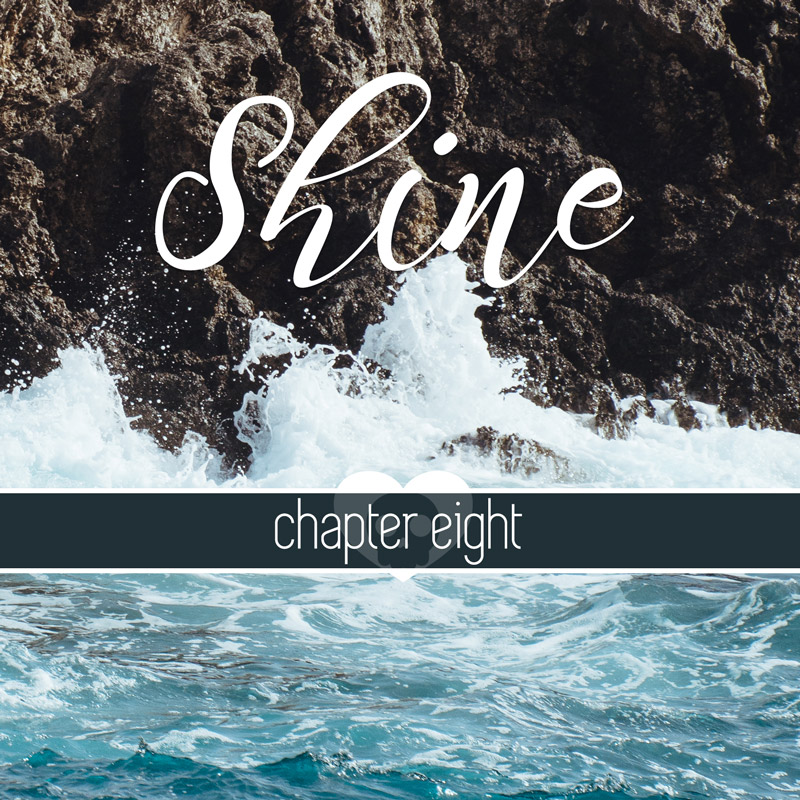 The Radiant Shimmering Of Sunlight’s Reflection From Beneath The Waves had never been afraid of monsters. That did not mean he was so short on sense as to go seeking them out. Particularly not when he could take a nap, instead.

Not that Radiant was lazy. There just wasn’t that much for him to do, if he wanted to stay close enough to shore to be found. Stinging Coral That Leaves The Reef was going to need to come and find him, the way she had the night before. Hopefully easier, this time, when it was bright enough for her eyes to see.

Radiant had observed them from afar, the people she had brought to shore to help her fix her shelter. There were… a lot of them. It seemed to him. Coral was the smallest of them, and it was no wonder she was bold if those were the kinds of people she spent her time around. They touched easily, sat beside one another and shared meals with words.

It was a good thing he was pretty, or he didn’t think he’d have a whole lot to offer as a mate.

He woke with a lazy exhale, stretching out his arms and his jaw as saltwater cleared stale air from his mouth. He ran his hands through his hair to rub sleepily at his scalp, shake out any knots that the currents might have made. His tail, which had been wrapped around the trunk of a sunken tree to anchor himself, relaxed and unwrapped so that he could drift closer to the surface.

He only barely breached into the air, just enough that he could breathe as he rolled backward and dove back down.

He stopped halfway down to the seabed, catching the sound he now recognized as the device that let Coral breathe like she had gills. He turned in the water to face toward the shore, where she was slowly trying to swim deeper.

She wasn’t a bad swimmer. She just wasn’t built for it. At all. For someone meant to walk, maybe she was a good swimmer. It wasn’t as if he had a great deal of basis for comparison.

He joined her, because it was much faster than waiting for her to meet him. «Hello, lovely.» She did look lovely in the water, her hair bright and her curves curving more than they did above. She stopped the kicking of her legs as he kissed her forehead, trying not to smile too much at the way she looked with her face half-obscured. It made her eyes look strange, covered as they were, but he didn’t want to tease her for it. Better that than that she hurt herself.

… maybe he would still tease her a little. Later.

Radiant raised a thumb at her, tilted it sideways and shook it in a way that he hoped made it clear that he was asking a question. «Are you better now? Does the light help?» He still didn’t entirely understand what had happened the night before, except that she’d been frightened. The darkness and the depth, not built for it at all.

The fact that she’d figured out the word for ‘scared’ without his having to tell her was actually kind of impressive. Of course, it was also the word for ‘aroused’, so.

There’d been some brief confusion.

He turned to offer her his back, tapping his shoulder. «Hold on and I’ll carry you.» He kept his fins flat as she gently wrapped her arms around him, but he waited. «You know we’re not going anywhere until you’ve got your legs secure,» he sang in warning.

It always seemed safer to him for her to hold on that way, so he didn’t know why she was always so hesitant. He liked it, anyway, when she finally made herself comfortable—soft skin pressed against his back, her chin on his shoulder. «Much better.»

The thing sticking out of her mouth made things a little awkward. He liked it better when she could rest her cheek against his skin.

That would just need to be a treat for when they were on the surface.

«I hope you actually like this,» he said, talking more to himself than to her. «I can never tell, with you.» She couldn’t respond, but one of her fingertips followed the shape of a stripe on his shoulder. «Careful,» he warned. «Keep that up and you’re going to give me the wrong idea.»

It was probably a good thing that she couldn’t understand him, in the end.

They came into view of what he’d wanted to show her, the rotting hull of a boat that had fallen to the ground. Her grip around him tightened, and so he stopped. «What’s wrong?» He tried to look at her over his shoulder, shaking a questioning hand at her again. One of the hands around him started to curl in an upward thumb of reassurance, but hesitated. He nudged her limbs to unwrap from him, turning so that he could see her better.

«Coral, lovely, what’s the matter? Can you show me?» He tried to stroke her jaw in a reassuring way, wishing that he could better see her face. It made it easier to understand her when he could see the way she furrowed her eyebrows, the way she smiled. She smiled often, wide and toothy things because her teeth could never be a threat, and the sight of it always pleased him inordinately, the way it never faded when he returned it.

She pointed toward the boat, then fluttered her hand over her chest the way she had the night before—then spread her palms, like a question.

«Is it scary?» he asked, though she wouldn’t be able to understand him to confirm it.

The alternative was that she was asking if they were going to be having sex in there.

He didn’t think she was asking that.

The answer was ‘no’ either way, anyway.

Unless she was asking, in which case the answer was…

… still no, because that did not seem safe. For her. For a lot of reasons.

«It’s not scary,» he sang and shaped all at once, shaking his head for her. Still she seemed hesitant, but she reached out to take his arm anyway, nodding. He pressed his forehead to hers in reassurance. «Tell me if you change your mind, and I’ll take you home, okay?»

Radiant pulled her along, and the closer they came to the boat the tighter her grip on his arms became. If she’d had claws, it might have been dangerous. It seemed like she was looking for something, though he did not know what.

It had not occurred to him that the sight of this might be disturbing to Coral, to see something down there that belonged to her people. Would it bother him, to see something of his own people in the air where it did not belong? He lifted his arms so that he could kiss her knuckles, and though she relaxed, it was only slightly.

He opened the door to enter ahead of her, leaving her to follow only if she wanted. His tail trailed behind him, the boat only barely large enough inside to fit him comfortably once he was entirely within it.

The debris that had cluttered it was gone, now, replaced with various sundries that he’d placed inside to amuse himself. He was not a member of any clan, had never bothered trying to establish territory for himself before. It was not a home, not really—but it was a place to leave his things when he was not using them. Which was similar enough, in its way.

Coral poked her head in the door, looking cautiously in various directions. Whatever she was worried she might find, she did not; she came further inside, though she tried not to touch anything. Even with her face half-hidden as it was, he could see the way her eyes widened and eyebrows shot up as they fell on the polearm he’d hooked along some furniture. She pointed to it, and then to him; he laughed.

«Yes, that’s mine,» he sang with a nod. She came closer, her gaze still on the weapon. «Don’t look so nervous! Why would that make you nervous?» She reached out to gently touch one of the gauntlets he’d hung on the wall, then looked back at him. «Here, hand that to me.» He held out a hand in a universal gesture, and after a moment she handed them to him. «Now turn around,» he said, pointing to her and spinning his finger. She turned, but almost immediately tried to look back over her shoulder at him. «No looking!» he warned, covering his eyes briefly to demonstrate.

It was very hard not to get distracted by her legs. And her… not legs. The broad curve above her thighs, round as her hips.

He’d put most of his armor into one of the storage units on the wall, because it was harder to keep those parts from floating away. And the rest of it did not look quite so impressive on the wall.

It was a silly thing to want to show off to her. Rationally speaking, he was aware of that. She would not know what it meant or how he’d earned it, would not be impressed for any of the reasons that it was impressive.

If nothing else, it was pretty. Coral liked pretty.

«You can turn back around,» he called, and she turned slowly, as if giving him the opportunity to change his mind. Her eyes widened again at the sight of him, making a sound that did not carry but which left a stream of bubbles around the device in her mouth. «What do you think?» he asked, even though she could not really answer.

She used her hands to say his name, Radiant, an answer and a call, and his fins flared with an involuntary purr.

Which was not terribly comfortable, when he was wearing his armor.

He didn’t mind settling for pretty, if it made her look at him like that.