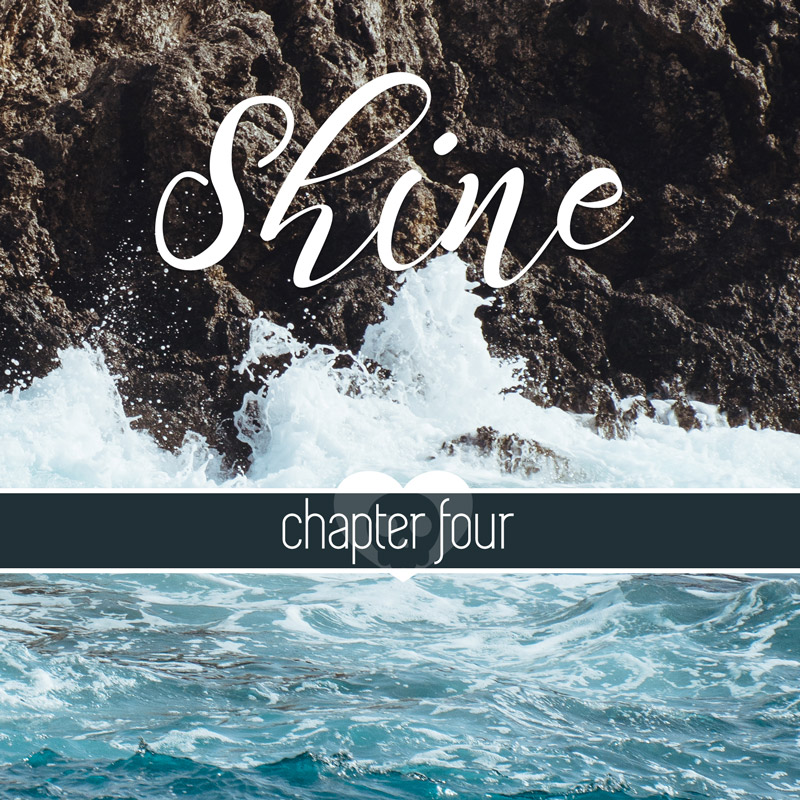 Emily went to the lighthouse every day for a week. She continued to wear prettier things than she should have, but she was better about keeping her distance.

He didn’t ask for a kiss again.

She couldn’t decide if she was disappointed.

Things went much faster when she figured out that he knew what an alphabet was—he carved strange shapes in sand and hummed the songs they spelled. She continued to be completely unable to repeat after him. But she taught him the shapes of letters and the sounds they made, and she brought him a dictionary. And then another dictionary, after the first one was too wet to use, along with a radio meant to be used in the shower.

The more he learned to say, the less he spoke. Or maybe it was just that he figured out how little he actually needed to say, when he could watch and wait and Emily would stumble to fill the silence.

She wasn’t a very good teacher. She knew that she wasn’t. Good teachers did not send people on their way with a basic lesson in phonics and a dictionary. English just wasn’t her specialty. She could speak it, in theory. She had a vague understanding that something existed called a past participle. That was about where her knowledge ended. She didn’t know a whole lot about the ocean, either, except that it was pretty and she liked it. Very few of her skillsets were turning out to be relevant to mermen.

Maybe someday Drago would need her to show him how to perform multiple regression analyses between variable sets with nonlinear relationships. She could explain alpha values. It would be magical.

She missed a day when work got hectic, unable to tear herself away from her computer for the time it would take to make the drive. By the time she thought to wonder if he’d waited for her, it was dark and she was exhausted, and it wasn’t going to do anyone any good if she went driving on the side of a cliff.

She was still very anxious the next time she pulled up to the worn out old lighthouse, as if he’d assume the worst and leave for good.

He wouldn’t, would he?

Things would be so much easier if fish had cell phones.

There was a faint sound from underneath the pier, and she followed it, making her way with care down the rocks that lead to the ocean. “Drago?”

He was sprawled out on his back in the shallow water, resting on the sand and listening to the news. It sounded extremely boring. She couldn’t tell how much of it he understood. He tilted his head back to look at her, and she waved. Still watching her, he turned the radio off, but said nothing.

“I’m glad you like it,” she said, trying not to stare at… him. In general. “The radio, I mean. I wasn’t sure you would.” He stretched out his arms, his tail curling and uncurling, silent except for the water that lapped against his skin. “I’m sorry I didn’t make it yesterday. Here, I mean. Work got crazy and I was just really busy and by the time I had any time I was so tired I just couldn’t do anything.” She spread her arms helplessly, then let them fall to her sides.

His tail twisted as he rolled onto his stomach, a stray lock of hair falling in front of his eyes. He pointed slightly to her left. “I am done with that,” he said. She turned to look, and found that he’d tucked the little dictionary between a boulder and the wood of the pier. Her brow furrowed.

“You’re… done? With the dictionary?” He nodded. She took it down to look at it, the pages wrinkled and curled with water damage. “That isn’t really how dictionaries work.

“You keep it,” she explained, “and when you hear a new word, or read one, you can look it up.”

He narrowed his eyes. “I am done with it,” he repeated, slower.

“I know you went through it,” she said, “but you’re not going to remember all of it.” He cocked his head to the side. The little flower dangled over his shoulder. “You might want to look up the things you forget.” He shook his head, and she sighed. “Here,” she said, opening up the book to a random page, “what if you need to know what… compendious means?”

He blinked at her. She would not be swayed. “You want me to tell you what compendious means?” he asked, finally.

When he put it like that, it sounded stupid. “Yes,” she said anyway, lifting her chin and attempting to look authoritative.

Emily looked at the dictionary definition, and then at Drago. He waited. “You were… supposed to put it in your own words…” She huffed, shutting the dictionary and putting her fists on her hips. “Did you memorize the dictionary?” she demanded.

He considered the question. “I read the dictionary,” he said.

“That is not how this is supposed to work,” she said, stomping one foot for emphasis. The rock on which she was balanced was slippery, however, and so she very nearly fell over for her trouble, dictionary falling in the water with a splash. She caught herself, but not before Drago had managed to make it to her side, looking perfectly ready to catch her. Her surprise nearly tipped her over again.

It turned out that when he wanted to, he could almost stand. He curled his tail just-so, bent it and balanced, and for a moment she was reminded that he was very large. But only for a moment, and then he sat back in the water, looking wary. Like clumsiness was something she did deliberately to inconvenience him.

“Are you seriously one of those people that can remember everything?” she asked, feeling defeated.

“You cannot?” he asked in return.

“No!” She crossed her arms over her chest. “I don’t even remember what compendious means, and you just told me.” She pursed her lips, somewhere between thoughtfulness and petulance. “Maybe it’s all the omega-3s. I think those are supposed to be good for your brain. Right? And fish have a lot of those.”

He nodded encouragingly, but she was not convinced that he believed that.

She huffed again, crouching down to sit precariously and resting her chin on her knees. There was a chill at the small of her back where her shirt did not quite meet her shorts. “I don’t get you,” she said.

“No.” She bit her lip. “The thing is,” she said, “I am awesome. I am smart, and I’m funny, and I’m fashionable, and super cute.” He nodded. “But you don’t even know what clothes are, and humor doesn’t really translate, and you don’t care about knowing how to calculate Pearson’s bivariate correlation coefficient. Which is fair, because neither do I, most of the time. So I guess I just don’t… know why you’re here. When I can’t say a word of your language or hold my breath for longer than a minute or even remember half the words of my own language.”

He leaned a little closer to her. “Why are you here?” he asked.

She snorted. “Because you’re a merman and you’re magical and this is the most interesting thing that has ever happened in my whole life.”

He pulled himself close enough that he could lay out again, resting on his side with his tail curling around her rock, his head propped up on one hand. He gestured with a finger to the stripes along his cheekbones. “You know what these mean?”

She hesitated. “Do those mean something?”

He tapped the fins at his pelvis. “These, do you know what they are?” She turned slightly pink, and shook her head vigorously. He tugged at the slender braid in his hair. “This?”

“I think we have established that there are a lot of things I don’t know,” she said, not feeling even remotely better.

“You are not less magical because you make bad jokes.”

“Hey!” Immediately her indignation had him rumbling with laughter. She adjusted her position so that she sat cross-legged, wiggling to try and find a position where stone did not dig into awkward places. “My jokes are great. If you knew what a bagel was, you would have thought it was hilarious.” He shook his head. “You think I’m magical?” He shrugged. “No, no, no takebacks. You said it, basically. You think I’m magical.”

“Hm.” Drago raked a hand through his hair. “Clothes.”

“Clothes,” he repeated. “They are armor. Being seen the wrong way hurts you. That is why it is only okay if you take it off. Yes?”

She gnawed at her lower lip. “You’re not… wrong…”

He nodded, apparently taking this as an affirmation of his understanding. “Did I hurt you?” he asked.

“What?” she said again. “Why would—no, of course not.” He nodded again, but she was unsatisfied with this. “When did you think you hurt me?” He tapped a finger against his mouth. “Oh.” She reddened. “That… no. Your teeth aren’t that sharp. I don’t think.” He watched her silently. “I know I maybe haven’t been as hands-on? Since then? I’m not frightened of you, if that’s what you’re worried about.” Still he said nothing. “I just didn’t want you to get the wrong idea. Or I didn’t want to get the wrong idea. Since I don’t really know what that means? Maybe kissing means something different. For… merfolk.”

“Means,” he repeated, halfway to a question.

“Not that it has to mean anything,” she added.

He sat up, and leaned across her lap to press a kiss to her cheek. She shivered, turned her head; once again his mouth caught hers, and this time she leaned into him, wanting more than he gave. He purred the way he had before, but when she caught his lower lip in her teeth he let out a shuddering breath, his hands on her knees to brace himself. The purr grew louder, lower; she felt it down to her toes.

Maybe it meant exactly what she thought it meant.

“Come back tonight,” he said against her lips, and her eyes widened. “Bring your swimming clothes.”

“Bathing suit,” he repeated. “I will show you something.”

“Will there be more kissing?” she asked hopefully.

Kissing her again was not technically an answer. She was not complaining.