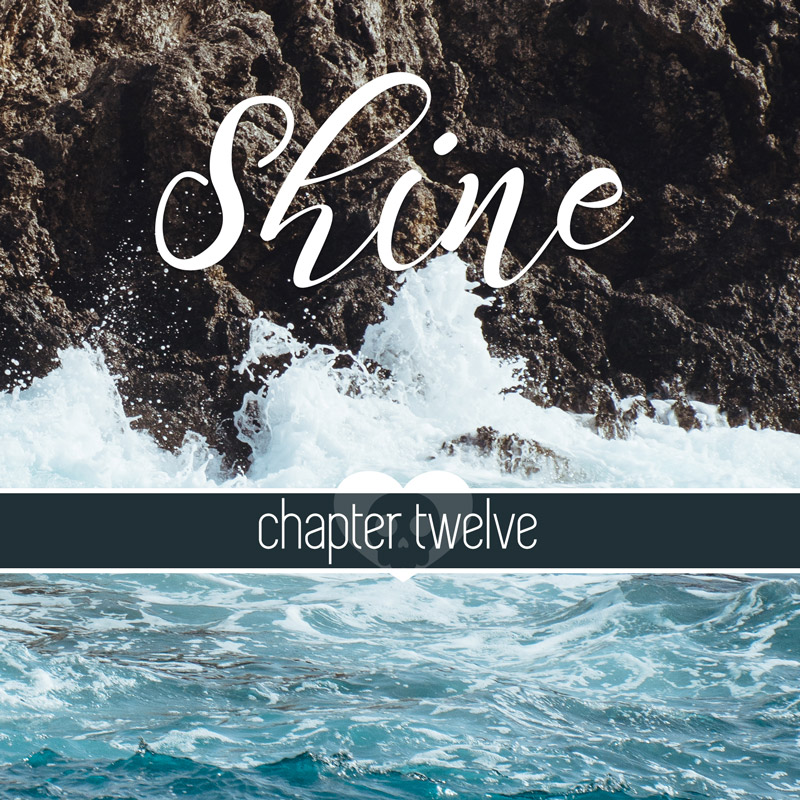 Drago was not at the pier in the morning. That wasn’t unusual; sometimes she didn’t see him until later in the day. Maybe he was out fishing, or… doing whatever else it was that he did, when he was not with her. Expecting his entire life to revolve around her would be selfish.

It let her get a lot of work done, which she couldn’t complain about. The internet was slow, but it worked well enough. She found herself thinking that it might be preferable for Drago to always be busy in the morning; it did wonders for her productivity. If she kept this up, she’d be able to pay off her parents in… thirty years. A mere thirty years.

Emily ate lunch sitting on the pier, but Drago was nowhere to be found. Which was still, she assured herself, fine. Who knew what kinds of errands he’d been ignoring in order to spend time with her? Maybe he’d let himself get behind. She understood the feeling. He was probably just taking care of the merman equivalent of spring cleaning. Maybe he was starting some kind of farm. A coral farm. He was giving up his hunter-gatherer lifestyle in favor of a personal agricultural revolution.

It was not until she was watching the sun set over the ocean that Emily admitted to herself that it might not be fine. It was less than fine. It may even, if she was honest, have been a problem.

It wasn’t as if Emily had never found herself bereft of a boyfriend once the man in question got what he wanted. It happened more often than she’d like to admit. But… that was after sex. Tab-A-into-Slot-B style sex.

Maybe Slot C. Once or twice.

The idea that a merman had been using her for slightly-confused handjobs made no sense whatsoever.

And if he was, wouldn’t he want more of them? At least?

She wouldn’t be happy about that, but she’d be willing to settle for it. Probably.

She considered trying to swim out to the little boat that seemed to be his home. She had all her equipment ready still. Except that it was dark, and her sense of direction was awful, and what if she got lost and even Drago couldn’t find her?

Sofia would spend the rest of her life trying to find a mysterious Italian sailor in order to enact her vengeance.

Emily shut her eyes, and tried to focus on her breathing.

Calm. She had to project calm. She had to be calm. She’d gone a day without coming to see him before, hadn’t she? It was unfair to expect that he’d never do the same. She was just being unreasonable. She was just being impatient. She was expecting too much, too soon. She didn’t want to be clingy. She didn’t want to be controlling. He’d come back when he came back, and he wouldn’t owe her an explanation when he did.

She opened her eyes. The ocean was still dark, still empty.

Thursday, in keeping with the tradition of Thursdays, was the worst day of Emily’s entire life.

Not just because she still had not seen the slightest sign of her boyfriend, who she could not contact and in whose absence she was languishing. Though that was, all on its own, awful. How had any relationship survived before the invention of cell phones? Of any phone? Of the telegram, at least? Emily could never have been a pioneer’s wife, dependent upon letters from the frontier. He’d get two days out in his covered wagon, and Emily would convince herself that they’d never been married at all. He was never going to send back for her. She would be alone, forever, with their thirteen consumptive pox-ridden children.

Not having thirteen consumptive pox-ridden children did not count as a silver lining.

No, what made Thursday truly awful was what she saw instead of her boyfriend during one of her many longing glances out the window.

Like any sensible person, she responded to this sight by crawling under her covers to pretend she wasn’t home.

“Emily!” he called, and she tried cover her ears with a pillow. It looked suspiciously like she was trying to smother herself. “I know you’re here, Emily! You left your purse in your car!”

Hell. Why couldn’t he have just driven off the pier? That was practically what the pier was for.

“Don’t be childish, Emily! I’ll only come back tomorrow!”

God. What a persistent asshole.

“How did you find my house, Robbie?” she shouted instead of making any motion toward the door.

“Your parents bought this property from the state! It’s public record!”

God. What a creep. She considered telling him that he was being creepy, but discarded the thought almost immediately. There wasn’t any point. Her life would never be long enough to make time for that argument.

“Would you please come down here so I can stop yelling?”

With a huff, Emily tossed her covers aside. She made no effort to fix the state of dishevelment she’d fallen into trying to avoid this, and stomped rather than walked down the stairs.

When she opened the door, it was only the smallest crack, not bothering to unlatch the chain lock. “What do you want, Robbie?”

“Were you sleeping?” he asked, looking perky as ever, all blue-eyed and chin-dimpled, frowning as he looked at the state of her hair.

“No,” she snapped, resisting the self-conscious temptation to smooth her hair down. She didn’t care if her hair was messed up. She didn’t care what she looked like. If he hadn’t shown up at her house like a creep, she wouldn’t have had to hide in bed.

“I don’t know why you’re lying when you clearly have bedhead.”

God. This was the worst part, in a situation made of nothing but bad parts. She could be completely and totally honest, and it still wasn’t good enough for him. Even now, even after she’d already dumped him, he still showed up to pass judgment on her.

“Fine. You caught me. Happy now? Go away.” She tried to shut the door, but he caught it and held it open; she recoiled from his hand and all but hissed.

Lord knew how he’d react if she had. Drago was clearly a bad influence. It would serve Robbie right if she slammed his hand in the door.

“Why are you trying to turn this into a fight?” he asked, sounding genuinely baffled and faintly hurt. Those puppy-dog eyes weren’t fooling her, though. They’d done this song and dance too many times before.

“Why are you here?” she countered, rather than try to dispute his characterization of her.

“I wanted to make sure you were okay,” he said, running a hand through his hair, leaving it just as perfect as it had been before. “I was worried about you.”

“What?” If he expected her to be touched by this gesture, he was very, very wrong. “We’re not together anymore, Robbie. You don’t get to worry about me, and you don’t get to check up on me.”

“And you don’t get to tell me what to do,” he finished, and of course he’d try to make her sound like the unreasonable one. “You can’t make me stop caring about you, Emily.”

“I don’t care if you care about me,” she said. “Just care about me from a distance instead of acting like a stalker.”

“That’s unfair and you know it,” he said, planting his hands on his hips in irritation. “I’m not hiding in your bushes, I’m not following you around—stopping by your house to check on you hardly makes me a serial killer.”

She never said serial killer. And hiding in the bushes was not a necessary aspect of stalking. She kept those arguments to herself, tempting though it was to point out that he was being disingenuous.

“You don’t look fine to me,” he said, utterly destroying her calm. “You look like a mess. You moved into a lighthouse and you’re dating some kind of violent foreigner, none of that seems fine.”

“What?” The longer the conversation went on, the more awkward it felt to have the door still mostly-closed, view impeded by the door chain. But she wanted it to be awkward, because the alternative was falling into a familiar extended conversation about her ex-boyfriend’s opinions about her life. “He’s not—my boyfriend is none of your business. How do you even know about him?”

She was fairly certain she’d blocked him on everything. Her friends had at the very least unfriended him.

“Gus keeps all his posts public.”

“You’re creeping Gus’s newsfeed to keep tabs on me?” she asked, incredulous. He had to realize how creepy that was. Right?

“No,” he said, “I check his newsfeed to see what he’s posted. He’s a funny guy. He posts interesting links. It’s not my fault if he posts publicly about what you apparently consider to be private business. And I don’t appreciate you trying to turn everything I do in some kind of evidence that I’m a bad person. It doesn’t make me a bad person to want to be sure you’re safe.”

“I moved into a home of my own,” she said, words carefully measured. “I have a new boyfriend, and he’s very nice. Just because I didn’t take the time to dress up when I didn’t know you’d be coming over doesn’t mean I’m a mess. And I don’t appreciate that you won’t listen to me when I ask you to leave.”

There. Completely reasonable. Reasonable, and calm.

Robbie sighed. He looked convincingly contrite. “I’m sorry,” he said, and even though she was sure he meant it she was equally sure that he wasn’t. Not really. “I just worry about you,” he said, as if it was any better of an explanation than when he’d said it before. “It’s just hard to believe you when you say that you’re fine, you know?”

And the calm was once again ruined. “I don’t know,” she bristled.

“Robbie,” she interrupted. “Just shut up before you say something stupid, okay?” He opened his mouth to protest, but she cut him off. “You think I’m a liar. I get it. You think I’m a lying liar who lies, so you stick your nose all up in my business, and that’s why I dumped you. And even though I dumped you, you still find out where I live to show up at my house and tell me I’m a liar, again. But I dumped you, and I got a new boyfriend who actually trusts me, and you don’t get to try and ruin that just because you don’t like taking no for an answer.”

His eternally placid expression had slowly given way to something stormier, scowling in a way that made him look on the verge of a tantrum. He jabbed a finger toward her, and if it had gone a little farther she might have slammed it in the door. “You dumped me,” he said, “because I’m the only person who calls you on your bullshit, and you don’t want to grow up. You want to do freelance jobs and let your parents buy you weird houses and date scumbags who make you look like you have your shit together by comparison.” He straightened, running his hand through his hair, fixing the line of his shirt.

“One of these days you’re going to realize that!” he called through the door.

Emily didn’t go back upstairs until she heard his car pull away.